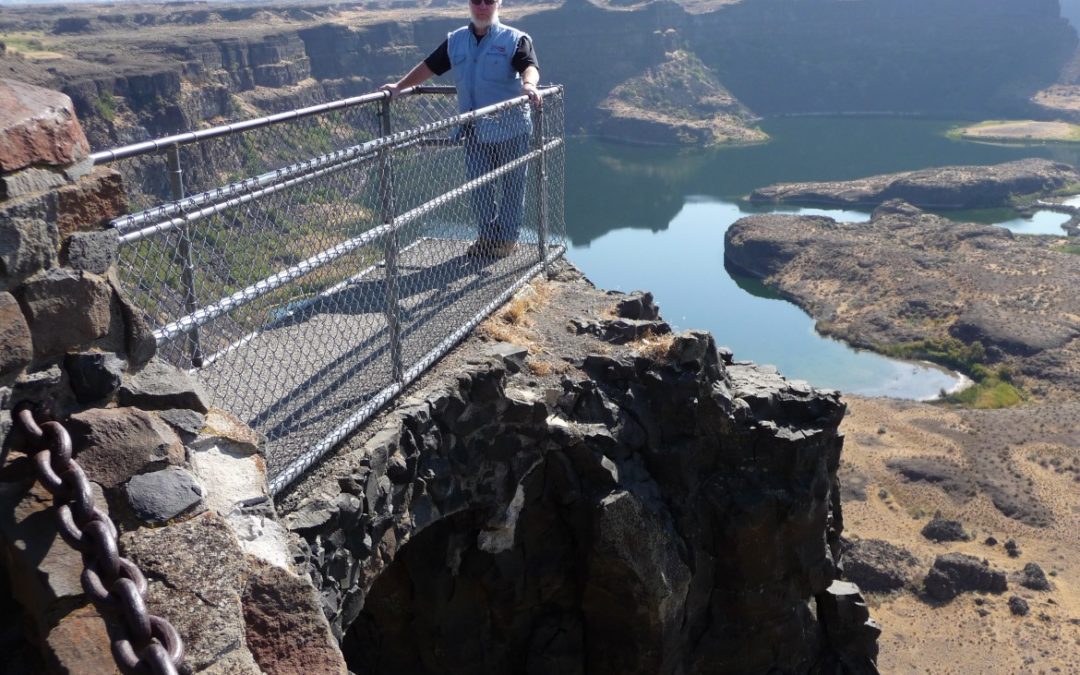 A bit of local knowledge brought us the surprise of our trip – about 60 Klms south of the Grand Coulee, something we had not found in any of our research – The Dry Falls.

During the last Ice Age about 14,000 years ago a waterfall, the largest ever known – apparently it would have made Niagara Falls look pathetic – drained this now desert area. The dry cliffs make for amazing view and stretches your imagination of what it would have been like all that time ago.

The road took us through the alpine desert of Washington —- what an amazing journey! 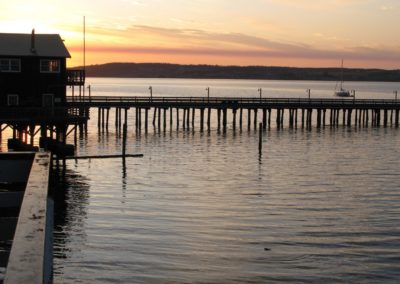 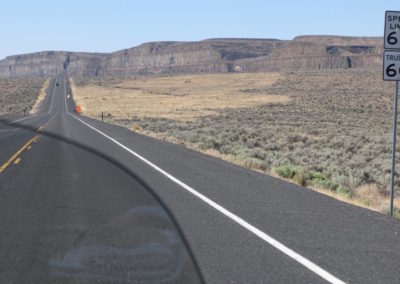 Travelling west through the endless fruit orchards, we often stopped and and snacked on some very yummy fruit.

We rode across Steven’s Pass at an elevation of over 4,000 ft, the day was drizzly, and cold, and we rugged up in our wet weather gear.

Crossing the pass we arrived at Everett on the west coast, home to Boeing. We had booked a factory tour to see how all our travel is safely undertaken. To try to describe the Boeing facility is like trying to describe the Grand Canyon. The vastness of scale is beyond description; it has to be seen to be believed!

We thoroughly enjoyed the two hour tour although the statics thrown at you tend to be a little overwhelming.

From Everett we crossed to Whidbey Island, and stayed two nights at a little seaside village called Coupeville. We were charmed by this village, postcard perfect and glorious weather combined with great restaurants and cafes made it hard to leave.

Seattle beckoned, so two car ferries later we disembarked in downtownSeattle, found our hotel, and indulged our senses in this wonderful city, home to Microsoft, Boeing, Amazon.com, Starbucks, Grunge, to name but a few.

After Mel adjusted the jeans down so that a fashionable amount of undies were showing, we took in all that Seattle has to offer including:

-Blues music at one of many great live music bars,

-Coffee at a cafe from the TV show Frasier,

-views from the space needle – the list goes on – we loved Seattle!

Four days later it was four hours riding south back to where it all started nine weeks earlier, Portland Oregon to drop off the motorbike for shipping home.

Two days in LA including a day at Universal Studios saw us leave for Brisbane after a most excellent adventure.