The Going To The Sun Road 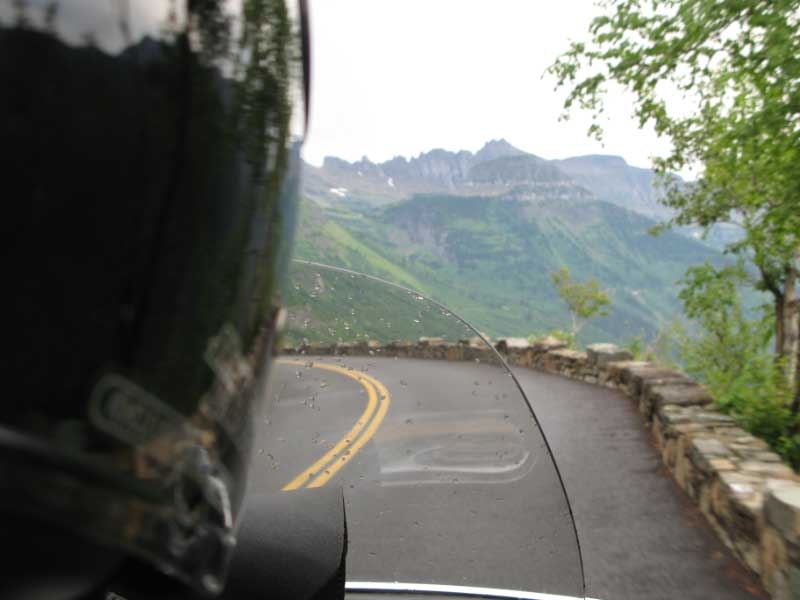 Well two days ago as I stood astride the continental divide (see photo) facing north I realized that if I had a pee and quickly went from west to east all the left side would go via various creeks & rivers into the Columbia and out into the Pacific while on my right would flow down to the Missouri then into the Mississippi and eventually out to the Atlantic – unfortunately it was too cold.

The ride up “The Going To The Sun Road” was one of the most challenging roads as I have ridden as it climbs about 3500 feet in approximately 15 klms – Very narrow, steep and winding with massive drop offs as well as being wet and under repairs – lots of gravel. What makes it tougher is that it is a stunningly scenic road so having to concentrate on the riding as well as taking in the mountains is hard for me as I’m usually only good at doing one thing at a time – like most males! The road is only open for about 10 to 12 weeks each year as in some places there can be 30 meters (not a misprint) of snow a year. This year about a 500 meter section was taken away by an avalanche but had been replaced by the time we went up.

As I write this I am sitting looking out of our motel room window to the southeast and the snow covered mountains bordering north Yellowstone. A line of thunderstorms keep hiding the peaks so along with the constant claps of thunder it is a visual and audible feast.

Can’t complain about the roads they are wonderful for riding. We have been keeping off the interstates as much as possible. The country roads have almost no traffic and go through some classic little western American towns. I have got the riding on the right side coming naturally now but we still tend to look to the right instead of the left when we go to walk across a pedestrian crossing and have to keep reminding ourselves to walk on the right side of the footpath. The mental calculations converting klms on my speedo to mph is now a lot easier – don’t wont to get a speeding ticket. I can’t bring myself to change the GPS to miles as telling me to turn in 1500 ft is too hard to visualize where as in 500 meters I can.

See you all later – Mel

Hi Me Chris back again, while Mel was writing his bit I went and did the washing, and talking to a lady down in the laundry – a you do – se as saying that they also came through from Glacier National Park, just 2 hours after us and they went through a pretty mean storm with rather large hail — how lucky are we!!